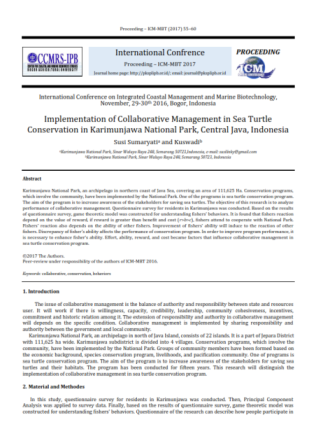 Karimunjawa National Park, an archipelago in northern coast of Java Sea, covering an area of 111,625 Ha. Conservation programs, which involve the community, have been implemented by the National Park. One of the programs is sea turtle conservation program. The aim of the program is to increase awareness of the stakeholders for saving sea turtles. The objective of this research is to analyze performance of collaborative management. Questionnaire survey for residents in Karimunjawa was conducted. Based on the results of questionnaire survey, game theoretic model was constructed for understanding fishers’ behaviors. It is found that fishers reaction depend on the value of reward, if reward is greater than benefit and cost (r>b>c), fishers attend to cooperate with National Park. Fishers’ reaction also depends on the ability of other fishers. Improvement of fishers’ ability will induce to the reaction of other fishers. Discrepancy of fisher’s ability affects the performance of conservation program. In order to improve program performance, it is necessary to enhance fisher’s ability. Effort, ability, reward, and cost became factors that influence collaborative management in sea turtle conservation program.