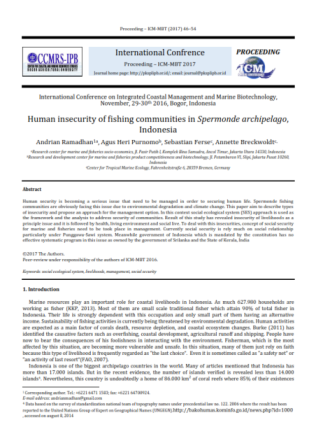 Human security is becoming a serious issue that need to be managed in order to securing human life. Spermonde fishing communities are obviously facing this issue due to environmental degradation and climate change. This paper aim to describe types of insecurity and propose an approach for the management option. In this context social ecological system (SES) approach is used as the framework and the analysis to address security of communities. Result of this study has revealed insecurity of livelihoods as a principle issue and it is followed by health, living environment and social live. To deal with this insecurities, concept of social security for marine and fisheries need to be took place in management. Currently social security is rely much on social relationship particularly under Punggawa-Sawi system. Meanwhile government of Indonesia which is mandated by the constitution has no effective systematic program in this issue as owned by the government of Srilanka and the State of Kerala, India.