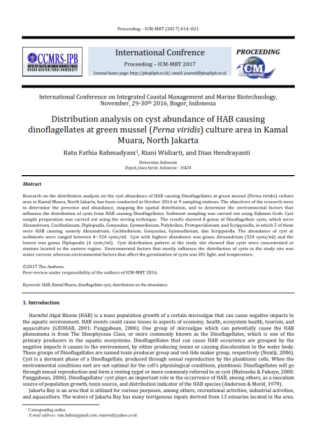 Research on the distribution analysis on the cyst abundance of HAB causing Dinoflagellates at green mussel (Perna viridis) culture area in Kamal Muara, North Jakarta, has been conducted in October 2014 at 9 sampling stations. The objectives of the research were to determine the presence and abundance, mapping the spatial distribution, and to determine the environmental factors that influence the distribution of cysts from HAB causing Dinoflagellates. Sediment sampling was carried out using Eijkman Grab. Cyst sample preparation was carried out using the sieving technique. The results showed 8 genus of Dinoflagellate cysts, which were Alexandrium, Cochlodinium, Diplopsalis, Gonyaulax, Gymnodinium, Polykrikos, Protoperidinium, and Scrippsiella, in which 5 of them were HAB causing, namely Alexandrium, Cochlodinium, Gonyaulax, Gymnodinium, dan Scrippsiella. The abundance of cyst at sediments were ranged between 4--324 cysts/ml. Cyst with highest abundance was genus Alexandrium (324 cysts/ml) and the lowest was genus Diplopsalis (4 cysts/ml). Cyst distribution pattern at the study site showed that cysts were concentrated at stations located in the eastern region. Environmental factors that mostly influence the distribution of cysts in the study site was water current, whereas environmental factors that affect the germination of cysts was DO, light, and temperature.